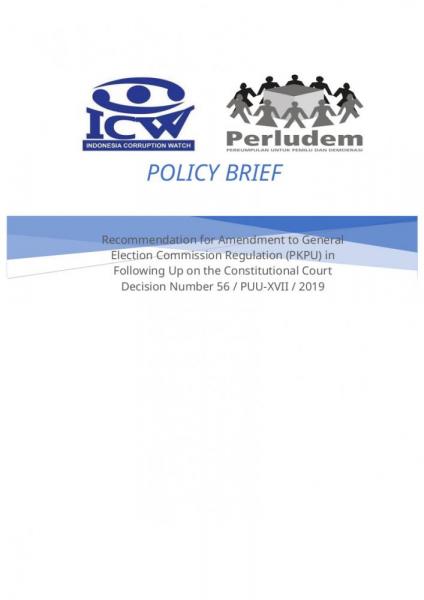 As one of the biggest democratic country in the world (Christian Wulld: 2011), Indonesia simultaneously facing a big problem: corruption. Conceptually, in a democratic country, corruption supposed to increasing in minimum level. However, the carried out democracy has in fact strayed a lot, because it has resulted to a type of political corruption.

Basically, actors of political corruption are policy makers who are elected through elections, or officials through political appointments. Formally, these positions include the President with his ministry structure, Members of the parliament, up to regional heads including the Governor, Regent and Mayor.

Lately, the oligarchic party system has increasingly enriched the occurrence of political corruption in the context of parties in Indonesia. This is strongly reflected from the various corruption cases that have been convicted by the Corruption Crimes Court, that show the party’s relationship with political officials in corruption cases such as the case of bribery Imports of Cattle, Barriers, and E-KTP (electronic ID)s which shows the intersection between the party and corruption.

In the election contestation, the party really determine the nomination of political actors. So there are a lot of political candidates trade or political dowry. As a result, there is politicization of bureaucracy to facilitate the return of political capital. Some of them also trade bureaucratic positions to get money. Business and political cronies also in fact intimidate and pressure the bureaucracy to get projects and concessions. The money from corruption practices will eventually return to the party elite and the ruling politicians. Thus, this practice continues to be in in the vicious circle of political corruption.