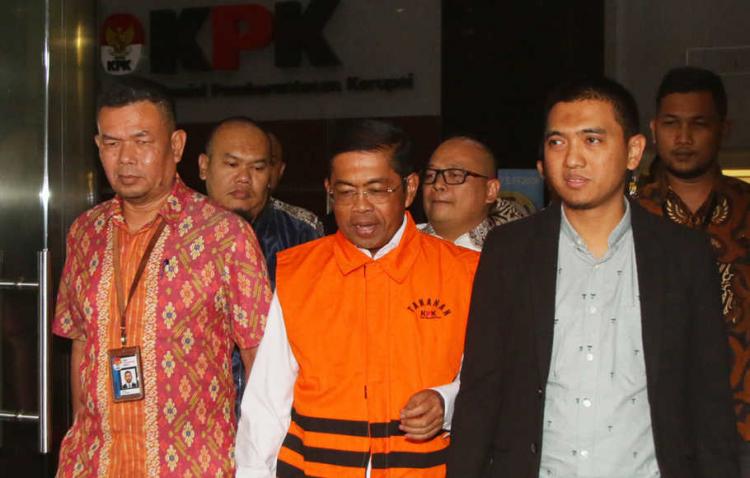 The Corruption Eradication Commission (KPK) officially detained former Minister of Social Affairs, Idrus Marham, on Friday (31/8). He was detained after having been named a suspect in the alleged bribery in the Riau-1 Steam Power Plant (PLTU) project, last week. Idrus was named a suspect by the KPK with the suspicion of using his influence as the Secretary General of the Golkar Party in the power plant project.

KPK suspects that Idrus has received a USD 1.5 million pledge from Johannes B. Kotjo if the Samantaka Batubara company, a subsidiary of Blackgold, signs a Power Purchase Agreement (PPA) contract with PT Perusahaan Listrik Negara (PLN). Johannes B. Kotjo is another suspect who has been detained earlier by the KPK, and is a shareholder of Blackgold Natural Resource Limited, one of the companies in the Riau-1 PLTU project consortium. Together with Johannes, former Deputy Chair of the Energy Commission of the House of Representatives (DPR) Eni Maulani Saragih was also detained by the KPK in an arrest operation (OTT) on July 13, 2018.

The PLTU Riau-1 is a 2x300 MW mine mouth power plant project with a value of USD 900 million. This project is a part of the 35,000 MW electricity mega project launched by President Jokowi. Although the President Director of PLN, Sofyan Basir, mentioned that the case of PLTU Riau-1 would not affect the implementation of the electricity mega project, the alleged bribery in PLTU Riau-1 could not be underestimated. This is especially because of the mode of trading in influence carried out by Idrus Marham.

In the Idrus case, the KPK arrested him using Article 12 letter a or Article 12 letter b or Article 11 of Law No. 31 of 1999 as amended by Law No. 20 of 2001 concerning Eradication of the Crime of Corruption juncto Article 55 paragraph (1) of the Criminal Code or Article 56 2nd of the Coriminal Code juncto Article 64 Paragraph (1) of the Criminal Code. This is because according to the KPK, Idrus has several roles in the Riau-1 PLTU bribe. Among them, Idrus received a promise or gift from Johannes B. Kotjo; Idrus is suspected of knowing the money received by Eni from Johannes B. Kotjo; Idrus allegedly played a role in encouraging the signing of the PTU Riau-1 Power Purchase Agreement; and Idrus is expected to receive a USD 1.5 million allotment from Johannes B. Kotjo. (Dewi/Adnan).