In-Depth Analysis: Rejection to the Revision of the Corruption Eradication Commission Law 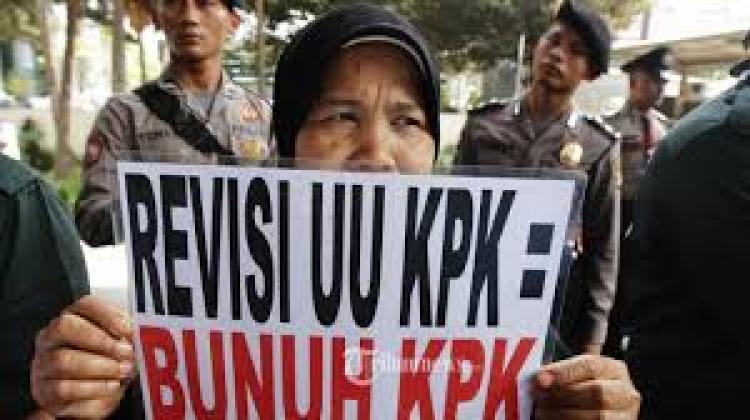 A number of professors united in the Rectors’ Forum visited the office of the Corruption Eradication Commission (KPK) on Friday, 17 March 2017. The professors brought lanterns on their visit, as a symbol of support to the KPK to continue pursuing the e-ID card project corruption case, while also rejecting all attempts of weakening the Commission through revision of the law.

The visit to the Commission was triggered by their concern over the socialization of the plans to revise the Corruption Eradication Commission Law (KPK Law) by several members of the House in various universities. In the visit, Prof. Asep Saifuddin, as representative of the Rectors’ Forum, declared a strong rejection of the revision of the KPK Law and expressed hope that the leadership of Indonesian universities would also similarly reject the revision.

Efforts to revise the KPK Law have regularly appeared in the agenda of the House. Since October 2010, the polemic of the necessity of revision of the KPK Law has appeared in public. In 2016, the House of Representatives, through the Experts Board (BKD) again disseminated to a number of universities across Indonesia the urgency to revise the legislation.

In National University, BKD conducted a seminar with the theme of “The Urgency of Revision of KPK Law” on 28 February 2017. In the event, several of the provisions of the KPK Law were discussed, such as wiretapping, authority to stop investigation, establishment of Commission's supervisory board and the preventive orientation of the Commission.

As is known, the 2017 version of the draft revision to the KPK Law has at least 3 crucial provisions that potentially undermine the KPK. The first is related to wiretapping. In this provision, the Commission may only conduct wiretapping when the case has entered the stage of investigation, or when sufficient evidence has been obtained. This is made more difficult as the wiretapping can only be done after obtaining written consent from the Supervisory Board.

Second, the draft KPK Law states that the Supervisory Board is in charge of providing permits to conduct wiretapping and seizure, and the board members are to be elected by the Parliament based on proposal of the President. This provision is particularly problematic because the Commission becomes vulnerable to intervention by the Supervisory Board, and potentially creates a dual leadership at the Commission.

The bottom line, if the draft revision of the KPK Law is read more carefully, the proposal does not show an attempt to strengthen the Commission, in contrary, it puts it in jeopardy. Authorities of the Commission are to be stripped down, making it vulnerable to intervention. The rejection from the Indonesian Rectors’ Forum and professors of anti-corruption should be reflected by the Parliament, because if this revision is forced through, they are ignoring the warnings of the professors and 4300 universities behind them. (Tama/Agus)