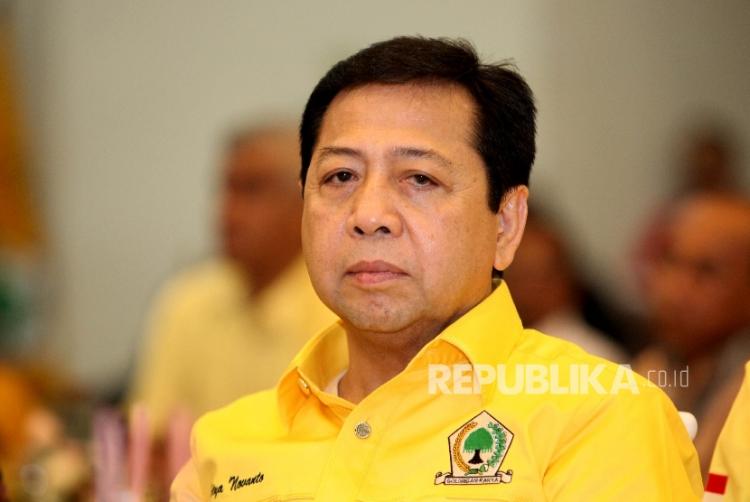 Despite having been named as a suspect in the e-KTP mega corruption case, and detained by the Corruption Eradication Commission (KPK), Setya Novanto does not budge from his position as the Speaker of the House and Chairman of the Golkar Party.

Setya Novanto’s actions were regarded by many to harm the image of the House of Representatives and Golkar. Vice President Jusuf Kalla, for example, called Setya’s actions ‘bringing a negative impact to the DPR’s image. Similar statements have also been made by the Chairman of the Assembly Zulkifli Hasan and other political elites, who called Setya ‘harming DPR’s virtue’.

Not only the DPR’s virtue is at stake. Several Golkar politicians begin to observe a negative impact from Setya’s actions to the party. Member of Representative Ade Komaruddin even called the Setya problem as harmful to the electability of the party. This condition obviously threatens Golkar’s electability in the 2019 elections.

Even if Setya Novanto refused to step down, it does not mean that he cannot be removed from his position as the Speaker of the House. This can be done in two ways. First, through the suggestion of the Golkar Party, as the party represented by Setya as the Speaker of the House. Unfortunately the strategic plenary meeting of Golkar on 21 November in fact accommodated Setya Novanto’s wishes. One of the decisions agreed was to appoint Secretary General Idrus Marham as the Executing Chairman, whose term will end if Setya Novanto wins his pretrial motion.

The decision of the central leadership of Golkar, which maintained Setya as chairman, not only disappointed the public, but also within the party itself and its sympathizers. One of them is the Golkar youth wing Gerakan Muda Partai Golkar (GMPG), which expects that the central leadership convene an Extraordinary National Convention in the plenary meeting to save Golkar.

Second, through the steps of the Ethics Board of the House of Representatives (MKD DPR RI), in processing the allegation of ethical breach by Setya Novanto in facing the court process. The 65-year old politician was alleged to make five violations of ethics, including trying to dodge legal action, and becoming a fugitive. The actions are alleged to violate Article 3(1) and 4 of the DPR Regulation No. 1 of 2014 on Code of Ethics. Setya is also suspected of violating Article 5, by misusing the name of the Secretary General of the DPR to avoid the summons of the KPK. (Tempo Newspaper,  23 November 2017)

In processing the alleged violation, the Ethics Board should also consider giving the sanction of terminating Setya from his position of Speaker of the House, or even terminating him from the DPR entirely. ICW notes that Setya Novanto has committed ethical breaches multiple times. The MKD should not be influenced by Setya Novanto’s requests and ignore the greater interest of the DPR.