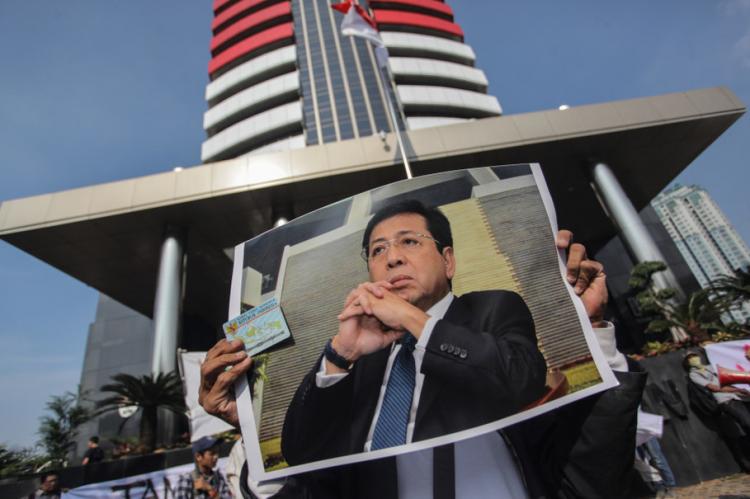 After again naming Setya Novanto as suspect in the case of corruption of e-KTP procurement, the Corruption Eradication Commission (KPK) is encouraged to move quickly. The Commission is expected to submit the case to the court and have Novanto detained.

The announcement of Setya Novanto as suspect was made by Deputy Chairman of KPK Saut Situmorang on Friday, 10 November 2017. According to Saut, Novanto was suspected of having violated Article 2 verse 1 subsidiary Article 3 of Anti-Corruption Law, juncto Article 55 verse 1 point 1 of the Criminal Code. The Chairman of the Golkar Party is suspected of having profited himself, another person or a corporation, misused his authority and position, and jointly caused a loss to the state with an amount of IDR 2.3 trillion, out of a project value of IDR 5.9 trillion.

After having been defeated in the pretrial process in South Jakarta District Court at the end of September, many elements of the society have pressured that KPK again name Setya Novanto as suspect. Other than the many irregularities in the considerations of the judge, the pretrial decision does not absolve Setya Novanto from the suspected criminal act.

Moreover, there are extremely clear evidences to support the allegation on the involvement of Setya Novanto in the e-KTP corruption case. Based on Kompas’ records, there are at least 13 facts in the trial explaining Novanto’s role. Among others, former Director General of Civil Registry Irman stated that Andi Narogong once said that the key determinant of the e-KTP project budget was not Commission II of the House of Representatives, but Setya Novanto, and he was said to receive a 7 percent share in procurement of the e-KTP.

Therefore, when the KPK names Setya Novanto as a suspect again, the public welcomes the move. At least it shows that the KPK is not paralyzed and still has courage, even though receiving attacks from all directions, including criminalization of the leadership. Indirectly, the KPK shows the public that there is still hope amid increasing corruption and crisis of confidence towards law enforcement officers.

In terms of the substance of the case, the determination of Setya Novanto as a suspect is also an important step in the effort to expose and solve the mega-corruption case. Based on the facts of the trials, Novanto played a vital role in the budget planning process and determination of the project winner.

Although the KPK claims to have two pieces of evidence, it still has to be careful and learn from previous experience. KPK should not let itself defeated again in a pretrial process, as it is almost certain that Setya Novanto and his legal counsel will file a re-pretrial.

There is no other way for the KPK other than accelerating steps to uncover the e-KTP corruption scandal. At least there are two methods. First, KPK should immediately submit the case to the court. According to the Constitutional Law expert Mahfud MD, if the case is immediately handed over to the Corruption Court, there will be no time for Novanto to file a pre-trial again. Regulations state that a suspect cannot file a pretrial if the case had been submitted to the court, because it has reached the principal and not the procedural aspect of the case.

Second, Setya Novanto should be immediately detained. The goal is to anticipate removal of evidence. Especially, previously there have been attempts to erase his tracks in the e-KTP case. Based on facts of previous trials, Novanto had ordered Diah Anggraini to deliver a message to Irman to claim not knowing Novanto when questioned by KPK investigators.

On the other hand, Novanto has not been cooperative either. Various reasons have been mentioned to avoid the summons of KPK investigators. Starting from recess, being in the electoral district (dapil), demanding a letter of approval from the president. The most phenomenal excuse was his claim of being struck by numerous illnesses such as vertigo, declining function of the kidney, to a heart problem, when he was named suspect for the first time.

KPK must learn from previous experience. Suspects of corruption often make various maneuvers to avoid legal process. If it does not move quickly, it is not impossible that the attacks become stronger and KPK is stalled again. (Ade)