Earth Day and Corruption in the Resources Sector 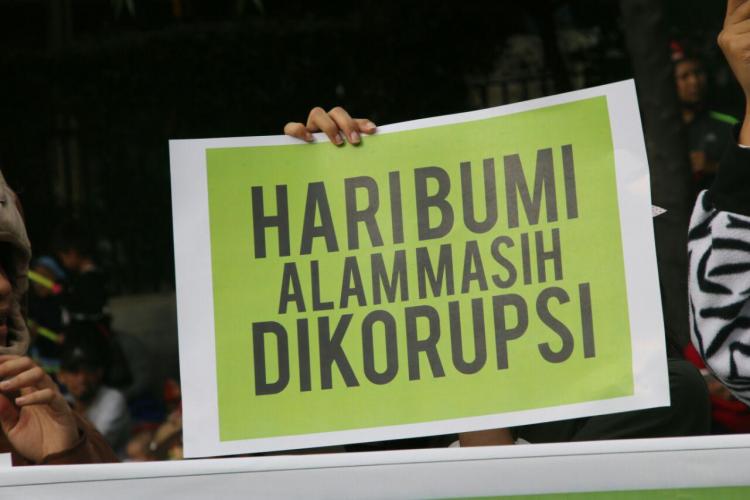 The International Earth Day is commemorated every April 22nd. The Earth Day is a day designated to raise awareness and appreciation of the planet inhabited by humans, the earth. Initiated by a US Senator in the 1960s, Earth Day activities were followed by all countries in the world.

Indonesia is no exception. The Earth Day, which fell on Sunday (22/4), was celebrated in several areas, including in Jakarta. The Sustainable Nature Civil Society Coalition, consisting of 15 civil society organizations in the Jakarta and Bogor region celebrated International Earth Day with an action at the Hotel Indonesia roundabout. This action had the theme of “Stop Plastic Waste, Stop Political Waste. Preserve the Mother Earth, Earth Preserved without Corruption.”

This theme represents the current state of Indonesia in which the management of the earth and its contents or natural resources (SDA) is colored by a number of political issues as well as corruption. Especially in the political year, natural resources become an interesting issue to be contested and traded by the candidate for regional head.

Since 2015, the Corruption Eradication Commission (KPK) has focused on corruption in the resources sector and initiated the signing of a Memorandum of Understanding (MoU) on the Joint Action Plan of the Indonesian National Resource Preservation Movement (GNPSDA). This activity is part of KPK’s efforts to function as a trigger mechanism. The role of KPK is as a trigger and to empower existing institutions in the eradication of corruption. It is useful to overcome the problems in the management of natural resources in various sectors, while increasing state revenues.

The MoU was signed by 20 ministries and 7 state institutions and witnessed by President JokoWidodo. It is expected to build commitment from all elements of the nation to jointly solve the problems of the nation in the management of natural resources.However, the results of ICW monitoring with NGOs in 6 provinces: West Sumatra, South Sumatra, Aceh, Riau, West Kalimantan and East Kalimantan in 2017 showed that the prevention of corruption in resources conducted by KPK in the regions has not been effective. This can be seen from the lack of commitment of regional governments in the implementation of the GNPSDA mandate, including encouraging information disclosure and public participation. ICW considers that there is a need for a legal breakthrough to resolve the remaining issues, not just by prevention.

KPK has made a legal breakthrough in the efforts to eradicate the corruption in the natural resources sector. Unfortunately, the breakthrough was not taken into account in the decision of the Panel of Judges of the relevant case: inactive governor of Southeast Sulawesi Nur Alam, in the calculation of the state losses for the corruption case of provision of Mining Business License (IUP).

The state loss calculation method used by the KPK prosecutor does not only take into account material losses from corruption, but also ecological losses, environmental restoration costs, and environmental economic losses. From the results of the calculation, the value of state losses arising from the case of NurAlam reached Rp 4.32 trillion. This value is almost double the value of state losses in the e-KTP case.

In the Corruption Court (28/3), Nur Alam was sentenced to 12 years in prison, a fine of Rp 1 billion subsidiary to 6 months in prison, an additional fine of Rp2.7 billion, and a five-year revocation of political rights. This verdict is more lenient than the prosecutor’s demandof 18 years.