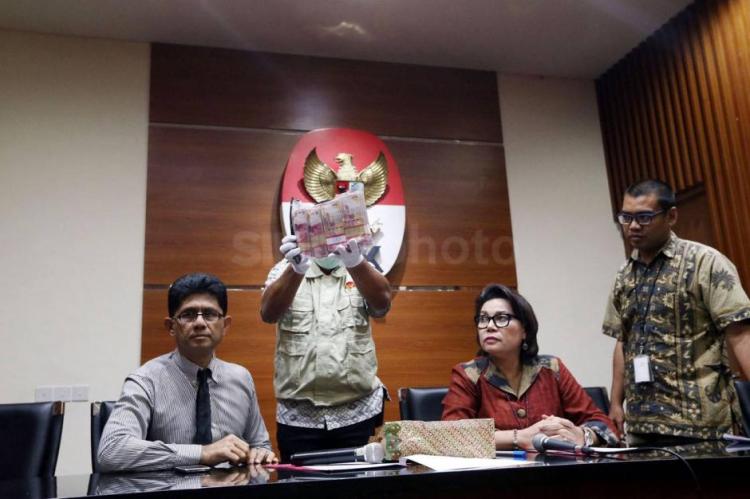 When the raid was made, KPK obtained evidence in the form of Rp 150 of cash from the Commission B office. The bribery was suspected to be related to the implementation of the duties of monitoring and supervision of the DPRD on budget use in the province, and the bribe was given to weaken the implementation of such duties to various government offices.

The involvement of regional legislature members in the practice of corruption is not new, as between 2010 and March 2016, the KPK has named at least 42 members of legislature as suspects.

The great authority of the DPRD since the enactment of regional autonomy should have improved the effectiveness of supervision; however this has been misused to demand illegal fees from the regional government. In fact this is one of the main modes for the practice of corruption, bribery and budget misappropriations.

A depressing phenomenon is the existence of recidivism (repeat offenders) in corruption cases. It should be noted that M Basuki, Head of Commission B, who was arrested by KPK was not a new actor. He has previously been sentenced due to misappropriation of the health premium budget of the DPRD members, which should have been paid to the insurance, but was distributed among 45 members of the Surabaya regional legislature.

Recidivism in the practice of corruption proves that the sentences currently given have not deterred the reoccurrence of the crime. According to the ICW data on sentencing trends in 2016, the average sentence to corruption convicts is about 2 years and 2 months, which is only 1/8 of the maximum possible sentence.

Lenient sentences are not new, almost every year, the number of convicted corrupt officials given lenient sentences continues to increase. This is influenced by several factors, such as the less than optimal charge from the prosecution, or because the Supreme Court has not set a standard on the criminalization for the judges in deciding corruption cases. In the end, judges often take cover behind their independence in pronouncing sentences, although the sentence does not cause the deterrence effect.

In the future, there is a need for uniformity in the charges of prosecutors, including the revocation of political rights for corruption convicts. The government should also propose a revision to the Anti-Corruption Law, rearranging the construction of articles 2 and 3, changing the concept of special minimum in the Law, to reduce the excessively wide discretion of the judges in giving sentences.

The government should also adopt other crimes (illicit enrichment/trading in influence) from UNCAC to the revised law, and also conduct total supervision and push the Attorney General’s Office to be more progressive in responding to corrupt practices. (Jaya/Agus)