In-Depth Analysis: The Invalid Status of the Special Committee for the Right of Inquiry to the Commission for the Eradication of Corruption 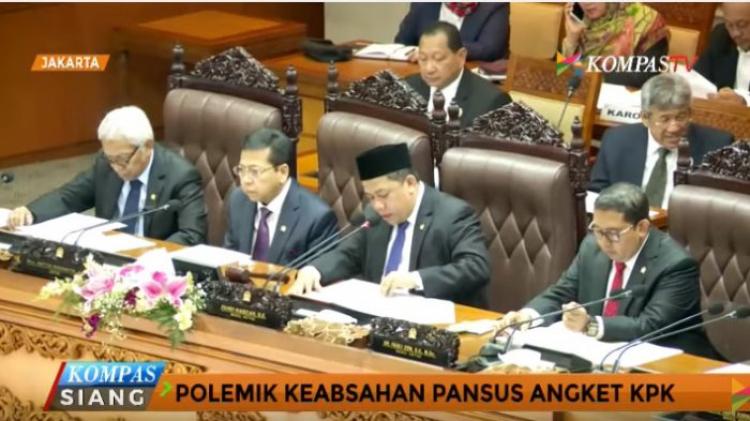 The House of Representatives (DPR) has officially created a Special Committee for the Right of Inquiry to the KPK. The names of the commissioners have been announced at the end of the plenary session on 30 May 2017. These include 16 members from 5 factions, including PDIP, Golkar, PPP, Nasdem, and Hanura, which are members of the governing coalition.

The lack of unanimity in the House of Representatives results in questions about the validity of the special committee of inquiry. Law No. 14 of 2014 on the MPR, DPR, DPD, and DPRD (MD3 Law), Article 201, declares that the comittee of inquiry must include members from all factions. From the ten factions in the House, half have supported the committee, and the rest have opposed it. These supporters to the committee in fact came from parties ostensibly supporting the government. It has to be recalled that the idea of invoking the right of inquiry came from the Commission III of the House’s demand to the KPK to open up the recording of the inquiry to Miryam S. Haryani, a lawmaker from the Hanura faction. The lack of unanimity among the factions will mean that the special committee of inquiry, consisting of only 5 factions, is not valid.

The intended substance of inquiry of the House special committee also includes a point that may be opposed to Article 17 letter a of Law No. 14 of 2008 on Public Information. The article mentions that information that may jeopardize the process of inquiry and investigation of an act of crime is exempted. In the use of the House’s right of inquiry, the special committee intends to summon the parties to provide the documents and information demanded by the committee. As has been explained earlier, the invocation of the right of inquiry to the KPK will be closely related to the handling of the e-KTP case by the KPK, which is ongoing.

The creation of the committee also suggests a conflict of interest. Among the representatives in the special committee, Agun Gunanjar of Golkar has been mentioned in the indictment in the e-KTP case as a receiver of funds. Masinton Pasaribu of PDIP, according to the testimony of Novel Baswedan on 30 March 2017, was also mentioned as a party pressuring witness Miryam S. Haryani to not disclose the fact that she had received and distributed funds (ICW press release).