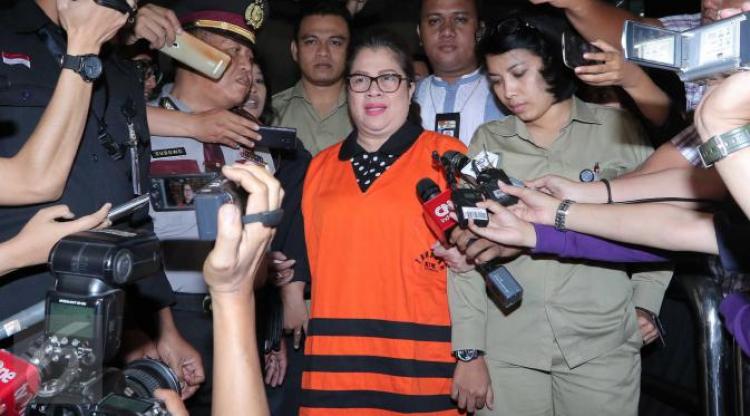 From the outset, Joko Widodo (Jokowi) rose to power with an abundant of public expectation. The people's long held yearnings for a national welfare, so long drowned by corrupt regimes, resurfaced strongly with the inauguration of Jokowi as the President.

At the least, Jokowi brought a strong capital for having clean image, good integrity, and concern for the people's agenda. In addition, he has a distance from Indonesia's traditional oligarchy regimes. He was not a party elite, a military official, nor a conglomerate who capitalize on political ties.

However, after one year in power, it became apparent that Jokowi need to contain delicate situations. Jakarta's economic and political elites keep pressing to have their interests accommodated, either with positions in public offices or with expanded access for their private business to capitalize upon.

The consequences were fatal, principally for the anti-corruption agenda. Jokowi erroneously appoint public officials to govern over law enforcement agencies, the National Police and the Attorney General. Rather than aiding the President to enforce the law as part of the ideals of Nawacita, Jokowi's campaign programs, these two offices dived headfirst in a wave of controversies that further drowned the positive image of the elected government.

Jokowi must also accepted defeat after a number of aides inside his circle of power turned out to carry real business interests and quickly capitalize on their strategic positions in order to seize economic gains. His various achievements in consolidating power among Jakarta's political and economic elites are consequences of Jokowi's weak political position. Basically, his background is both beneficial as well as detrimental.

As he did not come from Jakarta's elite circles, his position as President lacks a strong groundwork. In evidence, his subordinates -who were supposed to be loyal only to his policies- each have their own masters, their party leaders. These subordinates, ministers as well as ministry-level officials, too often ignored the President direct instructions. This was blatantly and repeatedly reflected in the attempts to criminalize commissioners of the Corruption Eradication Commission (KPK), in the attempts to revise KPK Law, as well as other instances where his ministers ignore direct Presidential instructions to halt any attempts that can dwindle the corruption eradication agenda.

Indeed, one must appreciate every serious measures that Jokowi had taken in order to effect changes and progress. The President deserves support for his bureaucratic reforms, specially designed to create a conducive and attentive business climate, as well as his program to reform management of natural resources, the war against illegal fishing, public infrastructure construction programs and his many other populist agenda.

And yet, it also become apparent that Jokowi would never achieve any fundamental reform, particularly with regards to the anti-corruption agenda, so long as he is incapable to severe ties that bind him wt the interests of political and business elites in Jakarta.***

Dewie was put under 24-hours examination immediately after she was apprehended in Soekarno-Hatta Airport. Thereupon, KPK named her as suspect for receiving bribery to fix a 2016 budget for a micro-hydro power plant construction project in Deiyai Regent, Papua. The sister of current South Sulawesi Governor, Syahrul Yasin Limpo, was subsequently detained.

Only a week prior, KPK had also named Patrice Rio Capella as a suspect. His case was an expansion of investigation of the corruption case that had already implicated Governor of North Sumatera, Gatot Pujo Nugroho. Both Gatot and his wife, Evy Susanti, were named as suspects after allegedly bribing judges and clerks at Medan Administrative Court (PTUN).

According to news reports, Rio allegedly received gratifications or presents from Gatot and Evy for helping them to bend direction of court trials on the case about Social Aid (Bansos) in North Sumatera Administration.

The case in North Sumatera has been a hard blow for NasDem Party, since it hit two top party officials with one stone: Otto Cornelis Kaligis, Head of Party Council, and Patrice Rio Capella, Secretary General.

Corruption cases that implicate politicians is nothing new in Indonesia. Indonesia Corruption Watch (ICW) records during the last decade show that KPK had legally processed 82 national and regional representatives (DPR/DPRD) in a variety of corruption cases. That's 55 members of DPR and 27 members of DPRD. These records also revealed that the most common scheme used was bribery: 77 parliamentarians in the last decade.

In both cases this week, both political parties gave positive response and pledged harsh internal sanctions for their incriminated members. But would that be enough? In order to put serious effort in preventing political briberies from repeating perpetually, the authorities need to address a number of issues.

First and foremost, the government must seal down legislative corruption loopholes. There need to be a monitoring function on every pattern of budget proposals submitted in the parliament. They can learn from the e-budgeting system that was implemented at Jakarta Provincial Administration. In reality, there's no control over budget proposal in the legislative process.

Second, Jokowi's administration must begin to review the management system of Social Aid (Bansos) and grant funds. Aside from the law enforcement aspects, it is equally important to address the prevention aspects. The government should consider the proposal to eliminate Bansos allocation in national and regional budgets altogether, because the implementation procedures for Bansos distribution are too loose and uncontrolled. Furthermore, there's always a repeating trend of increase in Bansos fund distribution every time there's an election coming. Obviously, this is prone to corruption.

Third, Bansos corruption also have an extra dimension in court corruption, thus making it important to optimize monitoring functions over judges. The judicial system need to monitor the integrity of judges.***