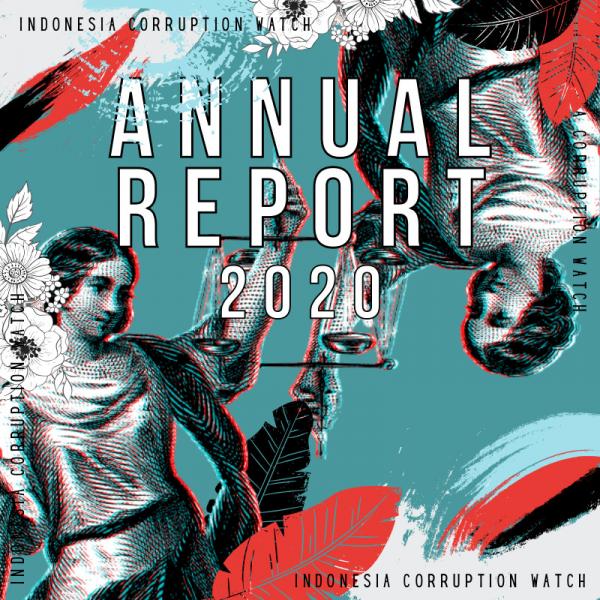 ICW’s 2020 Annual Report is published amidst the COVID-19 pandemic, where the threat of corruption has grown to an extent that we never expected before. Why is it so possible? Simply put, the Indonesian government has allocated an enormous amount of budget, close to IDR 700 trillion, to tackle the pandemic and its impacts. Nearly all procurement processes and budget spending are exercised under an emergency setting. This implies that the usual public sector transparency and accountability safeguards do not fully apply, as the priority was to act as fast as possible in such a dire situation.

At the same time, Indonesia’s relatively robust anti-corruption system, exercised by the Corruption Eradication Commission (KPK), was weakened by the passing of Law No. 19 of 2019 that revised Law No. 30 of 2002. As a result, Indonesia’s Corruption Perception Index (CPI) score dropped to 37 from 40 in the year earlier. Meanwhile, the need to strengthen various corruption oversight and detection units in the public sector is not yet addressed up to this point. The lack of action exacerbates the concern that corruption may become even more rampant.

During the pandemic, the room for civil society actors and journalists to carry out public oversight has been severely limited primarily due to restricted mobility on the ground. To prevent COVID-19 transmission, the government has put in place various mobility restriction measures, which forced civil oversight activities to rely on digital platforms. One implication is that this further exposes activists and journalists to arbitrary criminalization using the Electronic Information and Transaction Law, which is detrimental to the social control role of these actors.

The pandemic’s impacts have not escaped ICW. Public oversight work has become less effective when we’ve had to depend on online sources, as there is not enough public information on the government’s official websites and platforms. We also find insufficient data on important procurement projects in connection to COVID-19 pandemic response. As face-to-face communication has been reduced to virtual and telephony interaction, the government’s responses to the questions and requests for clarification have become extremely delayed – as if the pandemic is an excuse for public officials to shy away from their public accountability. For ICW and its ten networks in different regions, this issue has been heavily impeding our work in monitoring public spending for COVID-19 response efforts as there is nearly no government agency that provides sufficient public information.

Despite the challenges, ICW remains resolute to exercise its role as a watchdog and to continue exercising anti-corruption work using various approaches. One of the most important approaches is strengthening civil society. The Anti-Corruption School (SAKTI) that we used to run as offline sessions has now transformed into a fully online program – SAKTI Papua and SAKTI West Papua are the so-called ‘victims’ of the pandemic because they had to be done as online formats. While youths in both regions who have participated in our classes reported the benefits of SAKTI, we believe that SAKTI can be more impactful if conducted face-to-face.

We do not know for certain when the pandemic will end. What is certain, however, is that the efforts to tackle COVID-19 and its impacts will be significantly delayed if our public budget suffers from corruption that feeds the appetite of greedy public officials. We have also seen the impacts of corruption in many places. For this reason, the work of ICW and other civil society groups in advocating for transparency and accountability in the public sector is and will remain relevant.