2015 can be considered as the most difficult year to promote the anti-corruption agenda. A new leader does not necessarily mean a bigger hope. It probably does in the beginning, but the political reality will slowly destroy public sentiment that dreams th 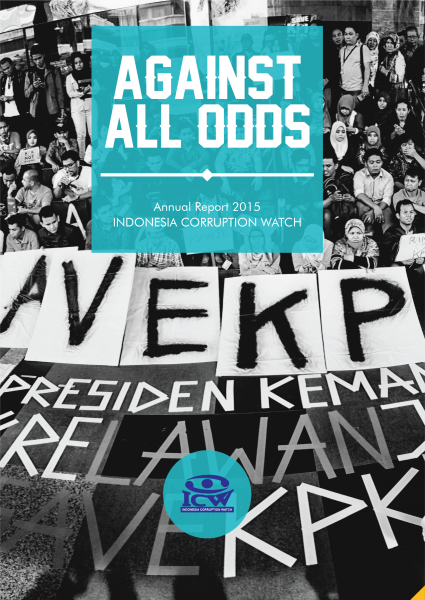 2015 can be considered as the most difficult year to promote the anti-corruption agenda. A new leader does not necessarily mean a bigger hope. It probably does in the beginning, but the political reality will slowly destroy public sentiment that dreams that under the new President, Indonesia will be braver to fight corruption. On the contrary, the reality is just the opposite of that dream. Efforts made from various perspectives and forces to discourage the anti-corruption agenda are increasingly evident. The result is a setback for anti-corruption movements. The criminalization of the KPK leader and staff members, and of the Commissioner of the Judicial Commission; threats against the Ombudsman of the Republic of Indonesia and the National Commission on Human Rights; a proposition to revise the KPK Law to reflect Sengkuni’s political ambition to dissolve or cripple this anti-corruption agency; and widespread psychological and “legal” terrors against anti-corruption activists, both at the national and local levels, made 2015 a year of terrors for the entire anti-corruption movements.

International experiences show that political will is the conditio sine qua non in order to effectively accomplish the corruption eradication agenda. Therefore, the country’s role in eradicating corruption is always critical. The fluctuating spirit to fight corruption is determined by political will and concrete actions demonstrated by the government, in this case the President, the Parliament and other critical elements in the government. Indonesia is an example of an unstable and inconsistent country hence the chart of public trust in the government to eradicate corruption often shows an up-and-down line because it depends on political situations underlying the context.

However, the role in fighting against corruption is not monopolized by the government, although they do have the largest responsibility. Communities, as the victims of corruption – either directly or indirectly – also hold a critical position.

Amid the difficult test, ICW has made it its main concern to continuously empower communities through various actions, approaches and possible ways. ICW also uses the reform momentum, particularly capitalizing on key government actors who are strongly committed to governance improvement, both at the national and local levels.

ICW’s primary work in 2015 consisted of the two above approaches, providing a more systematic response to external challenges, particularly given the political situation which did not support the anti-corruption movement. Continuously strengthening civil society bargaining power on the one hand, and collaborating with champions in the government to speed up improvements on the other hand.

In the first context, ICW’s main agenda is to consolidate anti-corruption movements in several areas that have been weakened in the past several years. Furthermore, ICW fosters new networks such as the Muhammadiyah Youth Organization, promotes joint advocacy agendas, prepares a working agenda for anti-corruption including to launch a Madrasah Antikorupsi in many universities with support from the Muhammadiyah. In addition, ICW mobilizes potential community groups, such as women, to participate in anti-corruption advocacy, including the national movement “SaveKPK”. Movements such as “KainPercaKPK”, Saya Perempuan Anti Korupsi/SPAK (I am an Anti-corruption Woman), Perempuan Indonesia Antikorupsi/PIA (Indonesian Anti-corruption Women), and Srikandi Antikorupsi/Anti-Corruption Heroines are ICW’s initiatives and contribution to reach more civil society actors who actively engage in fighting corruption.

To prepare potential anti-corruption activists, an Anti-Corruption School (Sekolah Antikorupsi, SAKTI) was built, expected to generate new buds among the youth with strong vision, missions and commitments to fighting corruption through a planned process. An approach such as SAKTI turned out to be an inspirational approach because many regions eventually built similar schools with different names.

Capacity building for civil society, particularly for anti-corruption NGOs in many regions, was provided through training on various issues while developing an instrument for the government to conduct monitoring. Opentender.net, rekamjejak.net, a budget tracking module, and other tools have been produced, which are expected to help with anti-corruption advocacy work.

In the context of collaboration with state actors, ICW has and has been supported by several agencies, such as the Provincial Government of DKI Jakarta, the City Government of Bandung, and other local governments to help speed up bureaucratic reform. A system for graft reporting, the improvement of transparency in procurement of goods and services, collaboration with the public procurement policy agency (LKPP) are some concrete examples of this endeavor. The resulting benefits cannot immediately be perceived, but the presence of champions who consider civil society as partners rather than as enemies is a new phenomenon, providing fresh air for anti-corruption movements in Indonesia.